Three things you must know about photography

Before we get into the details of the individual aspects of a good photograph as discussed in the last post the following are the three most important aspects that every photographer must know.

While a modern DSLR camera seems to present a mind boggling number of settings, these three are the most important and in fact the only primary aspects that matter. Not surprisingly these three aspects have applied to all cameras including film (SLR or otherwise) and EVF digital cameras. In fact, these three concepts apply all the way back to the very beginning of photography itself.

The primary elements of a camera

Before we can understand these three factors, we need to understand how a camera works: not the microprocessor powered complex modern marvel that is DSLR but the fundamental aspects that are common to all cameras including cheap disposable film cameras. A camera is made up of a lens element in the front through which light enters the camera and a sensor that records the incoming light. In film cameras the sensor is a film and in digital cameras it is either a CCD or CMOS sensor. Photographic film is coated with light sensitive chemical compounds that when exposed to light undergo chemical reaction resulting in new compounds. The amount of new compounds formed is dependent on the amount of light that hits a specific part of the film. A digital sensor converts light into electric energy which is then quantized ( a technical term for measuring the electricity and converting it into a discrete number such as 127) and stored in digital storage such as compact flash or SD cards. There is always a third element in between the lens and the sensor which is the shutter. The shutter always remains closed when the camera is not operational. It opens for a short amount of time to let light in and then closes. The sensor only records the light that falls during the time the shutter remains open.

So far so good. In fact most of you already know this. You might be thinking why am I going to such a great extent to rehash what you probably learned in middle school. Bear with me my friends because while the above explanation may be obvious the conclusions are deviously subtle.

Let’s start with the sensor. Do all films produce the same amount of chemical compounds when exposed to the same amount of light? Of course not. Believe it or not, you can still buy 35 mm film and if you do you will notice an ISO rating on the film that usually ranges from ISO 100 to ISO 800. The ISO stands for International Organization for Standardizations. Without getting into complicated details here is what you need to know. A film that is rated ISO 200 will have twice the sensitivity of ISO 100. In that same vein a film that is rated ISO 800 will have eight times the sensitivity of ISO 100 film. So why bother with lower sensitivity film at all in the first place? Why not get rid of it and stick to ISO 800 for everything? Speaking of which, why stop at ISO 800? Are there films with higher sensitivity? Why not use them?

As you will discover with everything in photography, there are tradeoffs and compromises. The additional sensitivity comes at a price, namely graininess. Generally films with higher sensitivity will result in images with higher image grain or noise. And yes, there are films with higher sensitivity all the way up to ISO 3200 as far as I know. So what does film sensitivity have to do with DSLR photography? After all, you cannot switch out the digital sensor in your DSLR and replace it with a sensor of higher or lower sensitivity. While you cannot replace the digital sensor, the built-in sensor does exhibit the same type of higher sensitivity for higher noise tradeoff. Have you tried turning up the volume really high on a cheap boom-box? If you did, you would have noticed that you can get the boom-box to play really loud but with significant distortion and noise. Similarly you can think of a volume knob attached to the sensor that the DSLR camera can tweak.

The relationship between shutter speed and film sensitivity 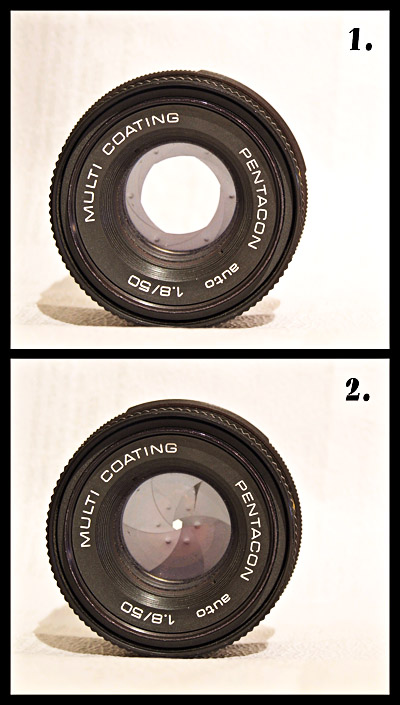 When it comes to explaining lens aperture, a picture is worth a thousand words. Every SLR lens has a metal blade mechanism called the aperture that can electronically open and close. In the picture to the right, the lens pictured in section 1 has its aperture relatively open at f/2.8 while the same lens pictured in section 2 has it stopped down to f/16. Why do we need an aperture mechanism in a lens? The aperture mechanism lets us control the amount of incoming light into the camera and also the depth of field. You can take one look at the picture above and understand why a wide open aperture would let it more light than an aperture that is mostly closed but what is this depth of field? 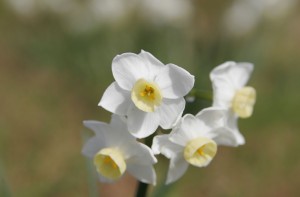 Consider this picture to the left. Only one of the flowers is in sharp focus while the rest of the flowers lie just out of focus. The grass in the background is blurred to the point that you cannot tell whether it is grass. This is an example of a picture with shallow depth of field. 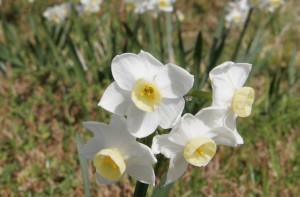 Now consider the picture to the left. Notice how all of the flowers in the image look sharp and in focus. While the grass in the background does look out of focus it still quite visible and discrete enough to make out that it is grass. This is an example of a picture with a relatively deep depth of field.

So when you open the aperture blades you let a lot of light in but you end up with a shallow field of depth. On the other hand you can close the aperture blades to create a small light inlet with a deep field of depth where everything is in focus but end up letting very little light in. It should be noted that a shallow depth of field is not a bad thing. It can be used creatively to bring depth information to the picture and keep the interest on the subject. A deep field of depth is useful in landscape pictures. So there is no right or wrong depth of field. It all depends on how you want the picture to look.

Unlike sensitivity and shutter speed which are inherently present and controlled internally by the camera, the aperture mechanism is part of the lens. Aperture is measured and specified using f-stop numbers which is a ratio between the focal length of a camera and the diameter of the aperture opening. Each lens is capable of a specific minimum (narrowest) and maximum (widest) aperture indicated by the lens manufacturer. It is not hard to close down the aperture so the minimum rating is usually not that interesting. Besides closing the aperture beyond a certain level causes diffraction phenomenon in the resulting picture. The more interesting specification is the maximum aperture. This is the widest aperture setting a lens will allow. Widest aperture usually ranges between f/1.2 to f/4.0. Here again there are curious non-intuitive properties regarding how aperture is measured and displayed. Higher f-stop numbers indicate smaller aperture openings. So f/4.0 is a smaller aperture compared to f/2.0 which in turn is smaller compared to f/1.2. Two aperture settings are said to be separated by one f-stop if the larger setting allows twice as much light as the smaller one. Here is where it gets curious. If your lens is currently set at f/4.0 aperture and you want to allow to twice as much light what aperture setting should you set it to? One would assume you would have to set it f/2.0 but that would allow four times the light. The next f-stop from f/4.0 is actually f/2.8! Here is a series of standard full f-stops:

The relationship between film sensitivity, shutter speed and aperture

Now that we have understood all three factors lets see how they all relate together. On one hand you have the sensor whose sensitivity you can adjust based on the incoming light. On the other hand you have two ways to control the amount of light that falls on the sensor: the aperture opening and shutter speed. Whenever you adjust one of them you will have to adjust one of the other two to compensate. For ex: If you decrease the aperture setting to increase depth of field you will have to decrease shutter speed to compensate the reduced amount of light entering the camera by exposing the sensor for longer duration. Another option is to increase the sensitivity of the sensor. It does not matter which one you tweak, you will have to compensate using one of the other two settings.

All of this sounds complicated. How the hell are you supposed to calculate exactly what to set these three values to? There is indeed a mode in every DSLR that does allow you to set these values independently: the full manual mode. It is definitely not for beginners. Even most experts do not use the full manual mode unless they are doing something so subversive it can only be called creative. Instead most of the time you will choose one of the automatic modes or a semi-manual mode. Let’s look at the two most common semi-manual modes first.

In aperture priority mode the photographer chooses to control the aperture and sensitivity only. The camera calculates the appropriate shutter speed by measuring the incoming light. This is the mode I most commonly use so I can control depth of field.

In shutter priority mode the photographer chooses to control the shutter speed and sensitivity only. The camera calculates the appropriate aperture by measuring the incoming light. This mode is most appropriate when you want to shoot fast action or intentionally slow down certain scenes such as flowing water.

Although you might not be aware, when you select one of the automatic modes you are specifying a priority to the camera. For ex: Choosing portrait mode forces the camera to keep the aperture as wide as possible with the ISO set to some arbitrary safe value such as ISO 400 in Canon DSLR cameras. We are now at a point to discuss more details about exposure which I will follow up in a separate post. Until then, Ciao.

← What makes a photograph good?