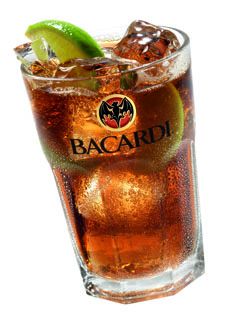 It is peak summer and the temperature is routinely hitting triple digits. Here is a great drink to relax and cool down. You probably know it as Rum & Coke but the addition of lime truly transforms this drink. Despite being one of the easiest and simplest cocktail to prepare this has proved to be a resounding success.

Cuba Libre!, which means “Free Cuba” in Spanish, was the battle cry of the Cuba Liberation Army during the war of independence that ended in 1878. As is typical of many cocktails, there are different conflicting stories about the origins of Cuba Libre. It was most probably invented in the 1900 in Cuba to celebrate the arrival of Coca-Cola to the island.

Cut the Lime lengthwise in half. Cut one half into long small wedges. Start with 3 to 4 ice cubes in a tall glass. Add the lime wedges to the glass and squeeze the other half. Add 2 ounces of Rum and top it off with Coke.